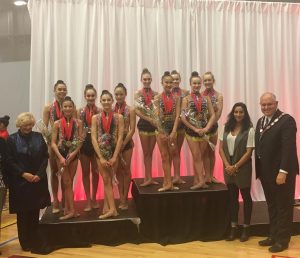 In the senior competition, Kaedyn Lashley finished 6th All-Around in the combined competition and had top- 8 finishes in Ball – 6th, Clubs – 5th, and Ribbon – 7th. Kaedyn, a member of the Canadian National Team will remain in Markham for a Gymnastics Canada National Team camp. The Senior All-Around title went to Carmen Whelan of Silhouettes of York in Ontario. 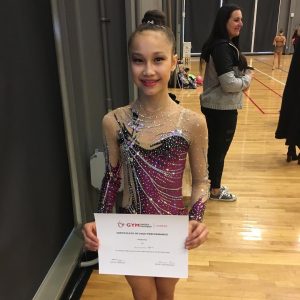 In her first year of eligibility in the Junior category, Samantha Pfeil finished 11th in a field of 73 Junior gymnasts in competition “A” and was named to the High-Performance category, where she will compete for 2017. Samantha finished 14th in the combined competition and competed 12 routines over the Elite Canada weekend. Manitoba Junior, Alexys Purdie had an outstanding hoop routine in qualification and competed in the hoop final on Sunday.